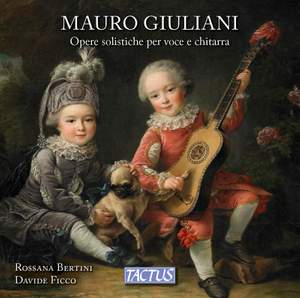 Mauro Giuliani is one of the most important figures within the history of the guitar. After spending his early years in Bisceglie, Barletta and Trieste, he moved to Vienna in 1806, instantly becoming an integral part of the prestigious musical circles within the city. He was an esteemed friend of, amongst others, Beethoven, Haydn and almost certainly Schubert, and a partner in the concert performances of virtuosos such as Hummel, Moscheles and Mayseder. The works presented on this release are performed in a historically sensitive manner, and combine the two musical genres to which Giuliani devoted his greatest efforts: vocal chamber music, and, to a greater degree, the solo guitar repertoire.