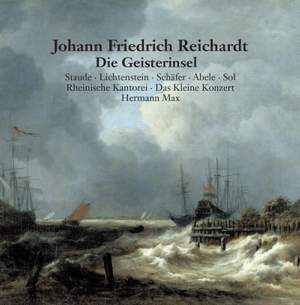 The Geisterinsel is a masterpiece of poetry and language: nothing more musical could be imagined.’ This positive judgment pronounced by Goethe in 1798 was seconded by Duke Carl August, the ruling prince in Saxe-Weimar, when he wrote in 1801 that there was ‘really beautiful music’ in this stage work. Both men were championing a singspiel in three acts premiered at the National Theater in Berlin on 6 July 1798 and performed fifty-five more times at this house until 1825. The authors of this successful work were the Gotha-born Friedrich Wilhelm Gotter and Friedrich Hildebrand of Einsiedel and its composer was the Konigsberg native Johann Friedrich Reichardt.