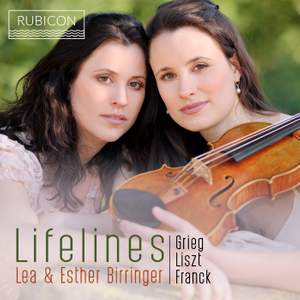 Franz Liszt forms not only the centre point of Lea & Esther Birringer’s recital, he also is the central figure that draws together Greig – of whom he was very supportive, and Cesar Franck, whose development of germinal motifs to create large scale complex movements was a direct influence of the Hungarian master.

Lea Birringer’s international career began at the age of 14 with her solo debut at the Berliner Philharmonie. Since then, she has been invited to international festivals, like the Salzburg Festival, MDR Musiksommer, Davos Festival, Crescendo Winter Music Festival in Florida, Festspiele Mecklenburg-Vorpommern and the festival LuganoMusica. Lea Birringer is a prize winner at the international violin competitions Kloster Schöntal, Premio Rodolfo Lipizer, Louis Spohr and Abram Yampolski. In 2008 she was awarded the top prize at the international Johannes Brahms competition. In addition, she has been a long-time scholarship holder of the German Music Foundation.

An enthusiastic chamber musician, Lea Birringer collaborated with artists like Pavel Vernikov, Paul Rivinius, Atar Arad, Barbara Bonney, Eszter Haffner, Wen-Sinn Yang and Igor Levit, and performs with her sister Esther as the Duo Birringer. ‘Gentle piano poet’, ‘Powerful bundle of energy’, ‘Congenial interpreter’, this is how the press has praised the young German pianist Esther Birringer. Her confident appearance, her sensitive as well as dramatic way of playing has delighted the critics and the audience equally. Her repertoire comprises 30 piano concertos as well as numerous of chamber works. Esther started playing the piano at the age of three. Karl-Heinz Kämmerling, Pascal Devoyon, Cécile Ousset and Arie Vardi are among her teachers.