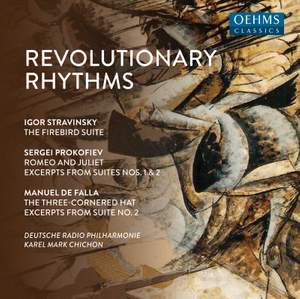 The Firebird Suite: Ic. Variation of the Firebird

The Firebird Suite: II Ring Dance of the Princesses

The 3-Cornered Hat, Suite No. 2: I. The Neighbour's Dance. Seguidillas

The 3-Cornered Hat, Suite No. 2: II. The Miller's Dance. Farruca

Karel Mark Chichon was Principal Conductor of the German Radio Philharmonic Orchestra Saarbrücken Kaiserslautern from 2011 to 2017; the programmes he presented during his seasons there were celebrated by the public and lauded by the critics in equal measure. One magnificent result of this period is the present recording with works by Stravinsky, Prokofiev and de Falla. All are ballets whose rhythms made an enormously modern, almost revolutionary effect at the time; the dancers had quite a lot to learn about how to coordinate their movements to this music.