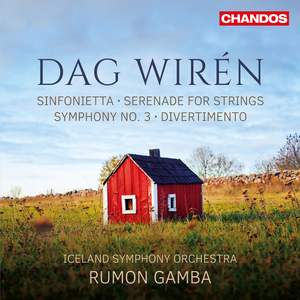 Bright and lively music from the Swedish composer Dag Wirén is unveiled here in surround-sound by the Iceland Symphony Orchestra and Rumon Gamba, only a few years after the completion of their Grammy-nominated and highly acclaimed series devoted to the neglected orchestral treasures of Vincent d’Indy. In this unique recording Gamba uses the large body of a full symphonic string section, rather than the somewhat smaller-scale chamber orchestra setup that has tended to be used for this music in the past. The effect is a more complete expression of the wit and strength of these works. Designed to ‘entertain and amuse’, as the composer put it in a note, the widely popular Serenade for Strings is here given an even more brilliant and powerful touch. Other, lesser-known works on the album similarly showcase a composer of fascinating range, who could write light and humorous pieces such as the Sinfonietta and the lively Symphony No. 3, as well as powerful, rhythmical, and serious works, of which the later Divertimento is an example.

There’s no mistaking [Gamba’s] affection for the idiom: his 70-minute anthology would seem intent on seducing the general collector. Very attractive it is too…An eminently recommendable disc.

An album that's as bold and invigorating as its cover, and painted in the same bright primary colours: the Swedish composer's Third Symphony was a delightful discovery for me, with Gamba's relatively large string section racing through the finale's passagework like a throughbred out of the starting-gates.

The Serenade receives a delightfully fresh reading, the string unanimity an absolute joy and clearly the fruit of much preparation. The scherzo frolics splendidly before the marcia finale (the most frequently excerpted movement) breezily strides by. The Divertimento is in the same vein and should be heard more, especially given the playful counterpoint of the second movement. The Sinfonietta exhales sunshine in its first movement; Prokofiev peeks through the finale. A most worthwhile disc.