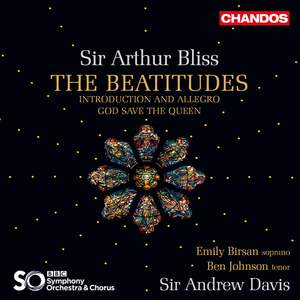 Bliss: The Beatitudes, Introduction and Allegro & God save the Queen

There is no doubting Sir Andrew Davis’s grasp of The Beatitudes, and he steers a broadly authoritative performance, with incisive, committed playing from the BBC Symphony Orchestra…Davis’s punchy,... — BBC Music Magazine, April 2018, 4 out of 5 stars More…

No. 2, First and Second Beatitudes

No. 4, I Got Me Flowers to Strew Thy Way

No. 6, The Lofty Looks of Man Shall Be Humbled

No. 10, And Death Shall Have No Dominion

Voices of the Mob

anon.: God Save The Queen

Excelling in recordings of Delius, Elgar, and Holst, Sir Andrew Davis here presents a spirited programme of works by Sir Arthur Bliss. It follows a recording of Morning Heroes that made the top recommendations of 2015; likewise recorded in surround-sound, it conveys the energy of both the exceptional soloists and the impeccable BBC Symphony Orchestra and Chorus. Premiered along with Britten’s War Requiem at the consecration of the new Coventry Cathedral in 1962, but hardly ever heard since, The Beatitudes is remarkable for its dramatic intensity, ‘full of contrast and striking orchestral effects’, as The Times noted after a recent Barbican performance given by the same forces. The reviewer added that ‘soprano Emily Birsan was silvery clear, well supported by the tenor Ben Johnson. And the biggest round of applause should go to the BBC Symphony Chorus, full of passion.’ To complete the album are an arrangement of the national anthem having all the flair that made the tenure of Bliss as Master of the Queen’s Music distinctive and successful, as well as the virtuosic Introduction and Allegro, dedicated to Stokowski and inspired by the powerful sound of American orchestras post-World War I.

There is no doubting Sir Andrew Davis’s grasp of The Beatitudes, and he steers a broadly authoritative performance, with incisive, committed playing from the BBC Symphony Orchestra…Davis’s punchy, urgent account of the Introduction and Allegro…is useful as this is another piece not easy to come by on record.

Andrew Davis clearly has a peculiar empathy for this music and the clean edges of Bliss’s orchestral palette, complemented by some lovely playing from the BBC SO and the two soloists, Emily Birsan and Ben Johnson.

Davis follows his championing of the First World War cantata Morning Heroes with this splendid account of the oratorio, reflecting the spiritual atmosphere of the occasion, yet not without its interludes of drama and violence. The writing for soloists (Emily Birsan, above, and Ben Johnson) is ecstatically lyrical.