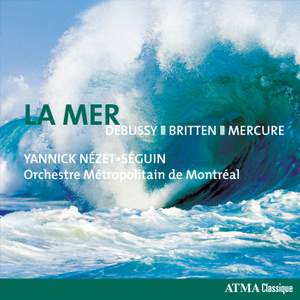 ATMA Classique will reissue its critically acclaimed recording of La Mer: Debussy, Britten, Mercure in stereo format. Recorded in 2007 by Yannick Nezet-Seguin and the Orchestre Métropolitain, La Mer garnered five stars from the French magazine Diapason, which declared, “What is immediately apparent in Yannick Nézet-Séguin’s Debussy is its meticulousness, its almost chamber-music like transparency, and its subtle shading.” Pierre Mercure’s Kaléidoscope was also praised for its “formidably contrasted reading …Under Yannick Nézet- Séguin’s baton, the work’s constantly shifting emotional limate combines tragic grandeur with the most cheerful lightness.”

La Mer revisits a live concert program performed by the Orchestre Métropolitain during its 2006-2007 season. "What genius Britten shows in his four interludes from the opera Peter Grimes. […] Nézet-Séguin recreates the exact context of each scene portrayed, from the depths of the ocean to the sky-shaking tempest. […] The young conductor ends with Debussy’s La Mer, […] a very impressive performance, sometimes lyric, sometimes livid, always detailed." (La Presse) "It was pure delight to hear Pierre Mercure’s Kaléidoscope played with such emotion." (The Gazette)