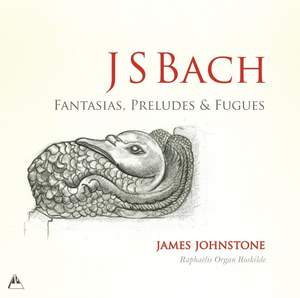 This latest instalment showcases an organ that had already given Roskilde Cathedral sterling service for nigh on 150 years by the time the young Bach embarked on his 250-mile trek to hear Buxtehude.... — BBC Music Magazine, March 2018, 4 out of 5 stars More…

James Johnstone plays the celebrated Baroque organ in Roskilde Cathedral, Denmark by Raphaëlis built in 1554-55 Metronome Recordings announces the second release in a series of recordings by the British organist and continuo player James Johnstone of the great organ music of Bach played on the remaining great European instruments of Bach’s time. The first release (METCD 1094) was a recording of the Clavieranbung III by J.S. Bach on the NIdaros Cathedral organ in Trondheim of the Joachim Wagner instrument that was built contemporaneously in Bach’s lifetime.

This latest instalment showcases an organ that had already given Roskilde Cathedral sterling service for nigh on 150 years by the time the young Bach embarked on his 250-mile trek to hear Buxtehude. Built by Raphaëlis in the mid-1550s it musters a panache that ideally complements the works assembled here… Johnstone’s subtle phrasing shadows Bach’s wistful musings, teasing out a wealth of expressive asides.

Johnstone shows an completely convincing personality. Radiant yet never showy technique, clarity of the most intricate polyphonies, (with the excellent initiative of an 8 'pedal for several fugues), orchestral textures of the plenum pieces, spontaneous sounding ornamentation...Ultimately, everything brings Johnstone closer to a Suzuki, with whom he shares long hours spent practising basso continuo.