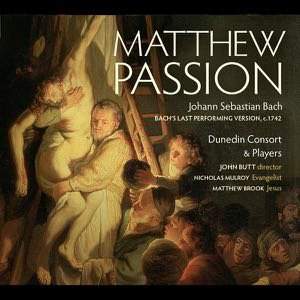 The Dunedin Consort, under the direction of John Butt, cemented its reputation as outstanding Bach interpreters with this 2008 recording of the Matthew Passion.

A critical success, the recording received multiple five star reviews and was named ‘Disc of the Month’ by Gramophone, ‘Building A Library: First Choice’ by BBC Radio 3’s ‘Record Review’ and one of the ‘5 Essential Works by Bach’ by BBC Music Magazine.

What makes this recording unique is that Dunedin Consort presents the Matthew Passion with Bach’s final revisions of scoring, as performed around 1742 (its most familiar form is the 1736 version).

John Butt and the Dunedin Consort recreate the instrumentation and vocal scoring that Bach employed to deliver a unique and historically informed recording; most striking is the use of eight principal voices (four in each of the two choirs).

Matthew Passion, one of Bach’s most celebrated choral masterpieces, is an emotional and challenging musical experience delivered with style and insight by the Dunedin Consort.