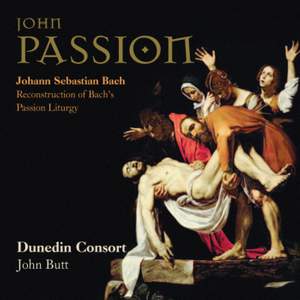 Cruger: Now thank we all our God (Nun danket)

This is the premiere recording of J.S. Bach’s John Passion, heard for the first time within its original liturgical context.

Director John Butt succeeds in giving listeners a refreshing outlook on one of the best-known pieces of the choral repertoire.

The recording also features works by Jacob Händl Gallus, J. Crüger and J.H. Schein from an original Leipzig hymn book performed by a congregational choir and the University of Glasgow Chapel Choir.

The recording was named a Gramophone Award Finalist, ‘Recording of the Month’ by three separate publications and topped the UK Specialist Chart upon its release in 2013.

Dunedin Consort’s recreation of this recording at the 2017 BBC Proms was highlight of the summer, earning critical acclaim for the ‘revelatory’ and ‘vital’ performance.