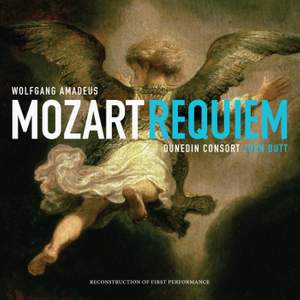 Mozart: Reconstruction of Requiem Performance at Mozart's Funeral in 1793: Kyrie

This GRAMMY®-nominated recording provides the opportunity to reimagine what this work may have sounded like at its very first performance.

Originally released in 2014, this recording is the first not only to use this new edition, but also to present the work using forces close in style and scale to those at the first performances.

One striking element is the fact that the soloists – Joanne Lunn (soprano), Rowan Hellier (alto), Thomas Hobbs (tenor) and Matthew Brook (bass) – are also the leaders of the choir, thus giving a greater consistency to the relationship between the solo numbers and the choruses.

Upon naming the recording the winner of the 2014 ‘Choral’ Award, Gramophone described the recording as ‘one of the finest Mozart Requiems of recent years’.