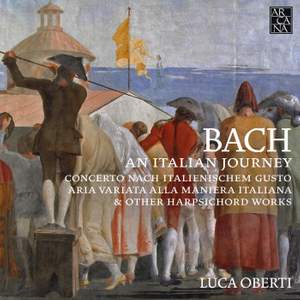 Concerto in D Minor, BWV 974 (After the Oboe Concerto, S.D935 by Alessandro Marcello): I. [Andante spiccato]

After his first solo album of music by Marchand and Clérambault, released in 2015 and nominated for a Preisder Deutschen Schallplattenkritik, the harpsichordist LucaOberti, who hasperformed on the international scene for years alongside such figures as Marc Minkowski and Christophe Rousset, presents a new CD on the theme of Bach’s imaginary journey to Italy. Schütz, Froberger, Muffat, Handel, Hasse, Mozart and Wagner are merely the most famous of the many musicianswho crossed the Alpsto immerse themselvesin the world of Italianmusic and grasp itsatmospheres and its secrets. Yet the composer who most fully assimilated the Italian style was Johann Sebastian Bach, who never even set foot in Italy. Hisjourneywasa virtual one: the scoresof the Italianmasters, which he avidly studied and absorbed from childhood onwards, guided him on an ideal itinerary from Vivaldi’s Venice to Frescobaldi’s Rome.

and the Fantasia and Fugue BWV904, the journey culminatesin the celebrated Italian Concerto.