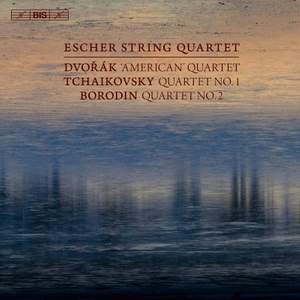 The Eschers’ new album, beautifully recorded in SACD, contains much fine playing by that young group. They are particularly a well-attuned to the Tchaikovsky, not only delivering a gently melancholic... — BBC Music Magazine, May 2018, 3 out of 5 stars More…

Full-blooded quartet playing in the grand, classic manner: extrovert and eloquent’ is how the performances of the Escher String Quartet were described in a review of their recording of Mendelssohn’s first and fourth quartets in BBC Music Magazine. After completing the three-disc cycle of Mendelssohn quartets – and earning further accolades, including a nomination to the 2017 BBC Music Magazine Awards – the quartet now returns with a programme which leaves plenty of opportunity for their special brand of playing. Composed between 1873 (Tchaikovsky) and 1893 (Dvorák), the three quartets gathered on this disc form a catalogue of unforgettable tunes and of emotions ranging from nostalgia to the most infectious joy. Each of the three composers wrote more than one quartet – Dvorák’s list of works includes as many 14! – but the ones recorded here are by far their best-loved. A contributing fact is surely that they all three include slow movements that tug at every listener’s heartstrings. Especially Tchaikovsky’s Andante cantabile and Borodin’s Notturno have become favourites in their own right, and exist in arrangements for every possible combination of instruments. But there is more to these works than the slow movements: throughout each quartet there is a wealth of melodic invention, rhythmic vitality and lyric fleetness which the Escher’s know how to exploit to the full.

The Eschers’ new album, beautifully recorded in SACD, contains much fine playing by that young group. They are particularly a well-attuned to the Tchaikovsky, not only delivering a gently melancholic account of its melodious second movement, but also presenting the symphonic-style first and last movements in a dramatic and appropriately vigorous manner.

After the elfin opening of the scherzo the second of these is gorgeous. Cellist and leader sing the melodies of the notturno with autumnal warmth and silvery clarity respectively, and the finale fairly sprints. This is a very fine CD, on which the rich sound of the quartet is aided by a generous acoustic.