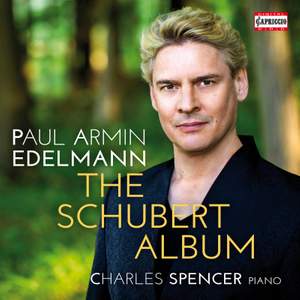 The baritone Paul Armin Edelmann presents on his already 4th Album for Capriccio a very specific personal selection of Schubert Songs: 'The title we had in mind was ‘On Fierce Roads’. Many things can be fierce, from storms to life battering you. It’s a broad field. But they are all agitated pieces and not very elegiac.' His international success as Lied Interpreter can be relived once more with this new release. Paul Armin Edelmann's association with music began at an early age as the second son of the internationally renowned singer Otto Edelmann. As a child, he was a member and soloist of the famous Vienna Boys’ Choir. Later on he reinforced his musical studies by studying voice with his father at the University of Music and Performing Arts in Vienna. Shortly after completing his studies he became a member of the Opera Theatre in Koblenz in Germany, where he sang over 30 roles.