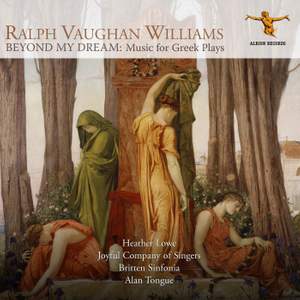 Vaughan Williams: Beyond my Dream

Here’s yet another hugely enterprising rescue-act from Albion Records...As has often been the case with so many of these comparatively early RVW discoveries, they make absolutely fascinating... — Gramophone Magazine, February 2018 More…

The Bacchae: Thou Immaculate onHigh - For His Kingdom It Is There - Where Is the Home for Me

O for the Ships of Troy - There Came a Man

Dark of the Sea

Bird of the Sea Rocks

Go Forth in Bliss

Albion Records is proud to present this new album of unknown music from the early maturity of Ralph Vaughan Williams. In 1911, RVW wrote music for three plays by Euripides, then newly translated into English verse by Gilbert Murray. He wrote music that he considered worthy of the plays, while also satisfying the requirements of Isadora Duncan (for dancing) and Gilbert Murray (who was anxious that the music should not overwhelm the poetry). Whether experimental or not, Murray finally concluded that he liked it very much.There was a single public performance, of which we know very little, but none of the music was ever performed with the plays for which it had been written. This beautiful music, for mezzo soprano, female chorus and orchestra has been transcribed from the scores and parts, and is recorded for the first time.

Here’s yet another hugely enterprising rescue-act from Albion Records...As has often been the case with so many of these comparatively early RVW discoveries, they make absolutely fascinating listening...these dedicated and scrupulously prepared performances...are all absolutely beyond reproach, and the disc as a whole must be deemed an essential acquisition for every true RVW aficionado.

These premiere recordings salvage attractive music that Vaughan Williams provided in 1911 for performances of three new translations of Euripides plays. ..Nothing here has the inimitable appeal of VW’s Aristophanic Wasps overture, but Iphigenia’s concluding hymnal, Go Forth in Bliss, is lovely.