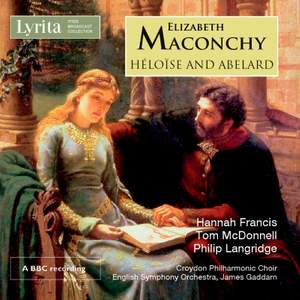 Patient listening brings reasonable rewards, with the presence of three quality soloists, plus James Gaddarn’s determined grip from the conductor’s podium, helping the stature of the work as... — BBC Music Magazine, March 2018, More…

Scene II: In the Cloister of Notre Dame

I. In Canon Fulbert's House

II. Outside Abelard's House in the Cloister

The story of Héloïse and Abelard, ill-starred lovers of the early twelfth century, is universally known, and a mountain of books has been written about them, some scholarly, some largely fictional. In making this libretto the composer has avoided the works of fiction and drawn only on Abelard's Historia Calamitatum in which he tells the tragic story in an open "Letter to a Friend", his letters to Héloïse, and most of all on Héloïse's passionate letters to Abelard. Two of Abelard's Latin Hymns, written at her request for Héloïse and the nuns of the Paraclete, are included; also his Planctus or Lament and a tenth-century love-song, both sung in English, and a popular Latin song for the Students. Héloïse emerges as the stronger and more remarkable character, despite Abelard's eminence as a philosopher, his brilliance and magnetism: students flocked to hear him from all parts. Héloïse herself was a distinguished scholar and later became the renowned Abbess of the Paraclete and founded six daughter houses. She was revered and beloved by everyone. But the Cantata is concerned only with her relationship to Abelard, and ends with his death. The Cantata is in Nine Sections. For those passages sung in Latin an English translation by William Le Fanu is given in the booklet.

Patient listening brings reasonable rewards, with the presence of three quality soloists, plus James Gaddarn’s determined grip from the conductor’s podium, helping the stature of the work as a whole to come across…While the flow of Maconchy’s music in the narrative dialogues is sometimes too constricted, there are powerful moments here nonetheless, as when the lovers confess their mutual passion.

The three principal characters are drawn with acute sensitivity, real individuals, not just pencil sketches…Star of the show is Hannah Francis’s Heloise, who develops from lovestruck student to the only person of moral strength in the drama…It would be highly instructive to see it staged.

It could hardly be better cast…Tom McDonnell[s] dark, saturnine baritone helps establish Abelard as an operatic Oliver Reed. Hannah Francis uses her warm, sinuous soprano to fashion a radiant, moving Héloïse. Philips Langridge galvanizes our attention in his limited opportunities as the tortured, jealous Fulbert. Héloïse and Abelard may not be Machonchy's summatory masterpiece, but it's choral and instrumental abundance surely merits further hearings, on stage where it belongs.