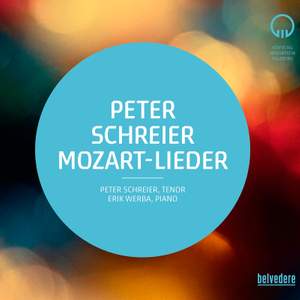 The recital given on January 25, 1978 by Peter Schreier, the leading Mozart tenor of the 1970s from Dresden, and Erik Werba, the distinguished Viennese song accompanist, presented 17 songs, the cantata with piano accompaniment of Die ihr des unermesslichen Weltalls Schöpfer ehrt, K 619, from the final year of Mozart’s life, and two encore pieces.

Schreier and Werba apparently wanted to present Mozart’s song repertoire in its full breadth while also omitting those songs which were very clearly to be sung from the viewpoint of a female protagonist.

Seen from today’s perspective, the Mozart songs in this recording are remarkably homogeneous. To Peter Schreier the operatic singer, Mozart was the first true Romantic. The songs are interpreted in a highly emotional manner, without ever becoming sentimental. The tempos tend to be more on the slow side of the spectrum here, as is also true in the ballad-like Das Veilchen, K 476, in which Schreier clearly interprets the mature, through-composed songs by Mozart as text-based and text-centric compositions, as if they were early forerunners of Schubert, Schumann or Brahms.