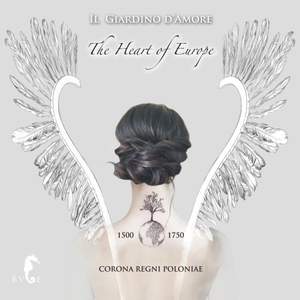 The Heart of Europe

The Heart of Europe (1500 - 1750), the new album by Il Giardino d’Amore orchestra and choir, in cooperation with Tempus and Trombastic Ensembles, presents rare music from Central Europe during the 250 year period from late Renaissance and Baroque era, with especial focus on the cultural exchange between Ottoman Turkey and Occidental Europe.

The music of this CD is centred around the very lively musical society in Poland in 17th Century and encompasses the wide range of musical styles. The protagonist in this story is Wojciech Bobowski (in Turkey called Ali Ufki ) who represented both cultures and connected their music. The other composers on this album are Johannes de Lublin, Gorczycki, Zielenski, Mielczewski,

The great Battalia by Biber, and Turcaria by Fux in new exciting arrangements with extended instrumentation are also included.

journey for the listener.