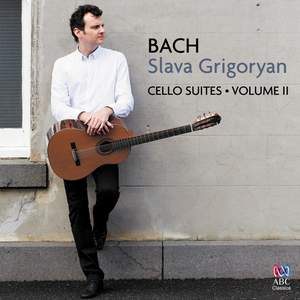 Winner of the Best Classical Award at Australia’s ARIA Awards, Slava Grigoryan’s acclaimed Bach journey continues with the second volume of the Cello Suites. Volume I was released at the end of 2016 has entered recording history through its phenomenal success, receiving global critical acclaim and multiple awards (including the 2017 ARIA Award for Best Classical Album), and smashing the record for the longest spell at the top of the Classical Chart in his native Australia.

Grigoryan again chooses the richly resonant baritone guitar for Volume II, whose lower pitch allows the Suites to be performed in their original keys. The Sixth Suite was, however, originally written for an instrument a fifth higher than the cello - the same degree higher as a classical guitar from the baritone. As such, Grigoryan performs the Sixth Suite on a standard classical guitar. The musical challenges of these three Suites are considerable. In the Fourth and Fifth, Bach’s musical writing is often dense and detailed, requiring astonishing dexterity, particularly when played on the guitar; there are also moments of deep emotion, most notably the incredible Sarabande of Suite No.5. In the Sixth, the music emerges into sheer joy, with cadenza-like moments which revel in exuberant virtuosity. To record Volume II, Grigoryan returned to the UKARIA Cultural Centre in the Adelaide Hills. Reflecting on his experience of living with and recording this defining music, Grigoryan said: ‘What can I say that hasn’t been said about the Cello Suites before? I’m constantly staggered by the universe of ideas in each movement of every Suite. The simplicity, the elegance, the structure and the spirit are simply breathtaking. It’s been such an honour to play this music. I know that, over time, there will be many changes as I continue to play them in live performances, but I also know that that’s kind of the point: there will never be a perfect version, just a long- term relationship with notes on a page that trigger feelings and emotions on a deeply profound level for the musician attempting to communicate through them.’

‘Grigoryan’s Bach has been well-worth the wait. Thank goodness the second

instalment is being recorded this year’ ****1⁄2 – Limelight Magazine

‘An absorbing new angle on some of the greatest music-as-music our culture has.’**** performance ***** recording quality – BBC Music Magazine (UK)

13 weeks at number one, ARIA Classical Chart – the record for an Australian album