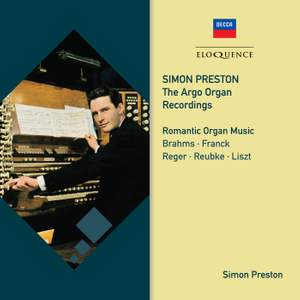 His technique is as good – and in some cases superior – to the continental virtuosi; in addition he brings to his playing an individuality and warmth that reflects his own engaging personality.... — Gramophone Magazine, June 1967 More…

Reger: Fantasia on the chorale "Straf' mich nicht in deinem Zorn", Op.40 No. 2

Music from five original Argo albums, newly remastered and compiled together for the first time in a 2CD set, with new booklet notes on the music and a tribute to Simon Preston.

During the 1960s, it often seemed as if a new Simon Preston organ LP appeared every few months: so much in demand was his playing, so well suited was he to the recording medium’s time-management pressures, and so nonchalantly did he seem to don the mantle of the United Kingdom’s ablest young organist. Besides the Franck EP featured here and a selection of the Brahms chorale preludes, Preston released an astonishing ten solo-organ recordings on Argo alone between 1963 and 1968; astonishing not least because of the large amount of preparation (on top of the day job) necessarily involved in works such as Liszt’s ‘Ad nos’ Fantasia.

The Franck pieces were recorded first, at the organ of the Chapel of King’s College, Cambridge, in company with Messiaen’s L’Ascension, in August 1962 while Preston celebrating his 23rd birthday. Upon leaving Cambridge, he became sub-organist of Westminster Abbey, where he recorded Reubke’s huge Sonata on the 94th Psalm in February 1964, coupled with a toccata, a fugue and a fantasia by Reger. At last, in Preston, audiences in London and across the UK had an organist who assumed the technique of a concert pianist. Meticulous in all matters, he took extraordinary care over registration, especially between phrases and in transitions: not least in the Liszt, which was recorded on the huge 1911 Forster & Andrews organ of Hull City Hall (rebuild by Compton, 1950). Having left the Abbey in 1967, Preston took over the music at St. Albans Abbey for a year in 1968, and during this brief period he recorded the six chorale preludes by Brahms which open this collection. A special note on the recordings has been contributed by Roy Goodman.

This anthology is one of five newly remastered sets canvasing Simon Preston’s complete solo organ recordings for Argo. They also include Preston’s recordings of Messiaen (ELQ4824917), ‘Simon Preston at Westminster Abbey’ (ELQ4824933), and 20th-century organ music (ELQ4824925) by Elgar, Hindemith and Maxwell Davies, and an organ spectacular featuring the Variations on America (ELQ4828101) of Charles Ives.

His technique is as good – and in some cases superior – to the continental virtuosi; in addition he brings to his playing an individuality and warmth that reflects his own engaging personality. He has become in a very short time a true ambassador for the organ.

Simon Preston, the brilliant young player … has already made several records, but this is perhaps his best so far … he gives performances which are specially notable for their sense of continuity and rhythmic control.

Simon Preston plays Franck in a way that pleases the English ear, gauges tempi and climaxes skilfully, and wrests from King's organ colours that do no disservice to this music