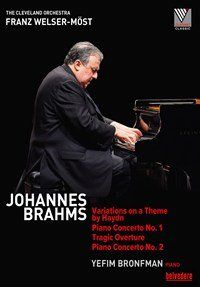 The Cleveland Orchestra is the 'aristocrat among American orchestras' (The Telegraph) and its sovereign, Franz Welser-Möst, rules his subjects with a velvet glove. Indeed, velvet and silk keep showing up in descriptions of the Clevelanders’ sound under its principal conductor. It is Welser-Möst’s nimble alternation between smoothness and a sound that’s as 'sharp-edged as a skyscraper' (The Telegraph after the Brahms’ First at the orchestra’s London Proms concert). That keeps the ensemble and the audience figuratively on its toes. The Second Piano Concerto, completed in 1881, is the work of a composer who has become skilled in the manipulation of large forms. Brahms treats the soloist as an equal partner with the orchestra. Yefim Bronfman has the uncanny ability to play large without stridency, to handle the most delicate passages without losing presence, and to play everything in between with a ravishing sense of tonal colour. Welser-Möst and Bronfman brought pulsing energy to the concerto’s second movement, a Scherzo, setting up an oasis of calm for the third that segued immediately into the genial finale, whose last chords were nearly obliterated by roars of approval from the audience. Laced into his forceful performance of Piano Concerto No. 1 was a surprising element of fury, as if the pianist had come unhinged momentarily. And yet Bronfman was also wholly present, taking time in relaxed passages to savour every second. Which of the two concertos Bronfman knocked further out the park is impossible to say. Both scores the pianist seized by their very hearts, drawing forth all the majesty, raw power and exquisite beauty that each contains.