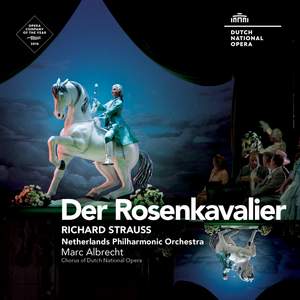 IV. Presentation of the Rose

Following on from the critically acclaimed recordings of Elektra (CC 7565) and Arabella (CC 72686), Challenge Classics presents this live recording from September 2015 of Strauss’s Der Rosenkavalier with the Netherlands Philharmonic Orchestra and Dutch National Opera Chorus under the baton of Marc Albrecht. The cast is a carefully selected mix of young and experienced Strauss specialists including Camilla Nylund (Die Feldmarschallin), Peter Rose (Baron Ochs), Paula Murrihy (Octavian) and Hanna-Elisabeth Muller (Sophie). ‘Marc Albrecht, once again presented his platinum Strauss credentials...The Netherlands Philharmonic, playing with dreamlike ease, tugged at the heart with airborne woodwinds and shapely violin lines, stopping a hair’s breadth away from full extravagance. This introspective restraint created a tenseness throughout, rendering the emotional climaxes all the more powerful’. Five Stars, bachtrack.com (September 2015)