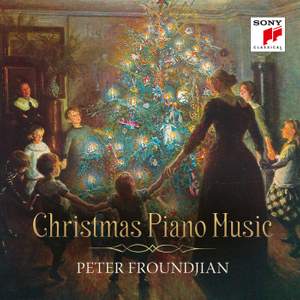 The quality of Froundjian’s playing is evident in the delicately nuanced account of Palmgren’s Snowflakes, which opens the programme…If you tend to get all carolled out over the Christmas season,... — BBC Music Magazine, Christmas 2017, 4 out of 5 stars More…

Bax: O Dame Get Up and Bake Your Pies

Presenting Christmas Piano Music, the brand new Christmas album showcasing piano music from the 19th and early 20th centuries by Ferruccio Busoni, Charles Koechlin, Carl Nielsen and others. Featuring five world premiere recordings, the album by pianist Peter Froundjian is filled with atmospheric, special Christmas music including rarities by both well and lesser-known composers of Romantic piano music from the 19th and early 20th centuries. Among his repertoire for the album, Peter Froundjian has chosen Snöflingor (Snowflakes) by the Finnish composer Selim Palmgren (1878–1951) which uses Impressionistic resources to paint a picture of gently falling snowflakes, while the little fantasia Drømmen om “Glade Jul” (The Dream of “Silent Night”) by Carl Nielsen (1865–1931) is a reworking of the melody of Silent Night. Busoni’s Sonatina in diem Nativitatis Christi, the world-premiere recordings of Noël and Pastorale by Ignacy Friedman (1882–1948) and the twelve Pastorales by Charles Koechlin (1867–1950) are all genuine discoveries. The six short variations on the old Northumbrian carol O Dame Get Up and Bake Your Pies by Arnold Bax (1883–1953) strike a folklike tone. The album is rounded off by Christmas piano music from Pastourelles, a set of pieces by the French composer Désiré-Émile Inghelbrecht (1880–1965), who was a close friend of Debussy. Peter Froundjian is the founder and director of the internationally renowned Rarities of Piano Music Festival. Founded in 1987, it has been described by the Frankfurter Allgemeine Zeitung as “one of the world’s finest and most precious festivals.” A graduate of the Berlin School of Music, where his teachers included Gerhard Puchelt, Peter received additional help and encouragement from Walther Kaempfer, himself a pupil of Artur Schnabel and Gottfried Galston.

The quality of Froundjian’s playing is evident in the delicately nuanced account of Palmgren’s Snowflakes, which opens the programme…If you tend to get all carolled out over the Christmas season, this stimulating recital is the answer.