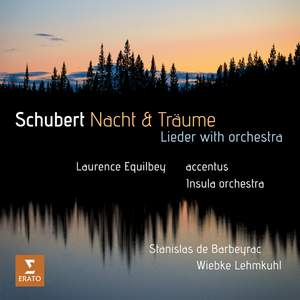 A surprisingly coherent musical experience. The revelation is the French composer Franck Krawczyk (b.1969) whose bubbling arrangement of An Sylvia had me smiling for days…Wiebke Lehmkuhl and... — BBC Music Magazine, Christmas 2017, 4 out of 5 stars More… 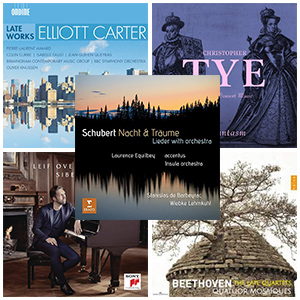 Nacht und Träume takes its name from one of Schubert’s best-loved lieder, which is joined on the album by a further 10 of the composer’s songs. All performed in orchestral versions by such masters as Berlioz, Liszt, Brahms, Strauss, Webern, Britten and Schubert himself, they are complemented by three choral numbers and an orchestral interlude. The singers are rising stars – German mezzo-soprano Wiebke Lehmkuhl and French tenor Stanislas de Barbeyrac – and Laurence Equilbey conducts two ensembles she founded: the Insula orchestra and the choir accentus.

A surprisingly coherent musical experience. The revelation is the French composer Franck Krawczyk (b.1969) whose bubbling arrangement of An Sylvia had me smiling for days…Wiebke Lehmkuhl and Stanislas de Barbeyrac match the orchestral heft well…the Insula Orchestra sounds warm and colourful in this intriguing, beautifully conceived recording.

A lot of thought has gone into this lovely album…immediately one is struck by the high quality of Stanislas de Barbeyrac’s singing. His interpretations are sensitive and intelligent and his tenor is beautifully controlled – flexible but steely…Wiebke Lehmkuhl is hardly less fine, her mezzo wonderfully limpid and rich.

Stanislas de Barbeyrac is absolutely outstanding in [Berlioz's arrangement of Erlkönig], riding the hefty orchestration with incisive, steely tone and bringing the four characters to uncanny life so vividly that it feels like a miniature opera.