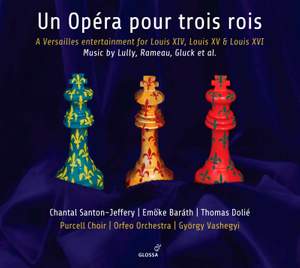 For approaching a century and a half in France – across the reigns of Louis XIV, XV and XVI – the Palace of Versailles played host, both indoors and outdoors, for an extraordinary sequence of dramatic musical performances. Un Opéra pour trois rois, conducted by György Vashegyi, represents the legacy of that time, a specially constructed operatic entertainment drawn from works by composers from Lully to Gluck, commissioned – and even, on occasion, performed – by kings, their queens and inamoratas.

There are plenty of firm favourites here – Rameau’s “Tristes apprêts” (Castor et Pollux) and “Forêts paisibles” (Les Indes galantes), but one of the additional attractions of this double-disc extravaganza released by Glossa is the chance to hear music of quality by hitherto woefully ignored compositions (Le Retour du printemps, Antoine Dauvergne, Les Caractères de la Folie, Bernard de Bury or Le Pouvoir de l’Amour, Pancrace Royer), all demonstrating the depths of quality still waiting to be rediscovered. And there are selections to be had from operas by Mondonville, Destouches, Leclair and Francoeur and Rebel as well. Further attractions are the performances from the three soloists (each adopting the role of an allegorical figure for the event): Chantal Santon-Jeffery, Emöke Barath and Thomas Dolié, along with Vashegyi’s Purcell Choir and Orfeo Orchestra. In his booklet essay, Benoît Dratwicki draws on his immense knowledge in order to set the scene in the royal residence of Versailles for this imaginary fête musicale of lyricism and duets, music both sombre and joyful, symphonies and orages.

French music with a Hungarian twist...Sprightly orchestral playing and solo singing, but not such a well-focused choir.