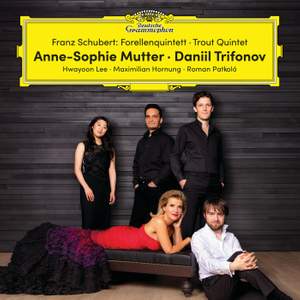 Schubert’s adorable Trout Quintet emerges as more of a shark, or at least a dolphin…But it is emphatically domestic music, and the thing that strikes you as soon as this disc starts is the dynamic... — BBC Music Magazine, June 2018, 3 out of 5 stars More…

4. Ständchen In D Minor (Arr. For Violin And Piano)

Ave Maria In B Flat Major (Arr. For Violin And Piano)

Two stars from different generations, artists of the highest calibre, mark their first collaboration with an album devoted to one of the supreme landmarks of classical music.

Anne-Sophie Mutter, who in 2016 celebrated the 40th anniversary of her professional debut, and Daniil Trifonov, now in his mid-twenties, joined forces with three outstanding young string playing alumni of the Mutter Foundation at the Baden-Baden Festspielhaus in June to perform Schubert’s Piano Quintet in A major, popularly known as the “Trout” Quintet.

They also explored the composer’s Notturno, a sublime late work for violin, cello and piano, and arrangements of his songs Ständchen and Ave Maria for violin and piano.

Schubert’s adorable Trout Quintet emerges as more of a shark, or at least a dolphin…But it is emphatically domestic music, and the thing that strikes you as soon as this disc starts is the dynamic scale of the performance, the huge sound that the violinist and the pianist are getting out o their instruments, as if they take it for granted that they are play8ing in a large concert-hall.

This Trout is clearly in a fast-flowing river, the first movement bubbling with excitement from the off, Trifonov’s triplets tripping effortlessly along. While it’s scintillating in its clarity, the big climax, where the pianist bursts into fortissimo semiquavers sound just too rushed…Exciting or just a touch aggressive? It’s a taste thing.

Trifonov’s playing is straightforward, joyous and celebratory. Only in the fourth movement of the quintet does the pianist behave like a virtuoso trying to draw attention to himself by playing as fast as humanly possible. Perhaps the presence of gifted soloists in the ensemble, such as the double bass player Roman Patkoló and cellist Maximilian Hornung, helped remind the Russian pianist to refrain from showing off unduly. He fits aptly into the sonic texture of the poignant Nocturne for piano trio.