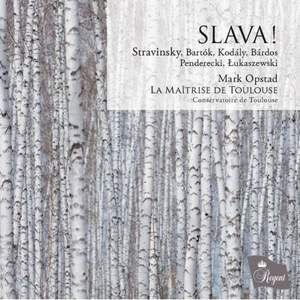 These young voices bring a delightful freshness to this demanding repertoire. — Choir & Organ, March 2018, 5 out of 5 stars

Having recorded four CDs dedicated to French music during the first ten years of the Maîtrise de Toulouse’s existence, this programme takes this world-class choir in a new direction.

All the pieces presented here are by composers from Eastern Europe, most significantly the Russian, Igor Stravinsky and the Hungarian, Zoltán Kodály. Kodály’s Hungarian contemporaries, Lajos Bárdos and Béla Bartók are also featured and the programme is completed by two Polish composers, Krzysztof Penderecki and Paweł Łukaszewski, whose Ubi Caritas was commissioned by the Maîtrise for this recording.

The programme contains works for both full choir and upper voice choir, both sacred and secular, sung in Latin, Church Slavonic, Hungarian and Russian.

Slava!, the title of our programme not only represents the Slavic origins of many of the composers featured, but also the Russian word for ‘glory!’, used as a refrain in many of the Stravinsky songs. Slava was also the familiar name of the great cellist Rostropovich, for whom Penderecki wrote his work featured here.

In 2017 the Maîtrise de Toulouse was awarded the Prix Liliane Bettencourt for choral music.

These young voices bring a delightful freshness to this demanding repertoire.