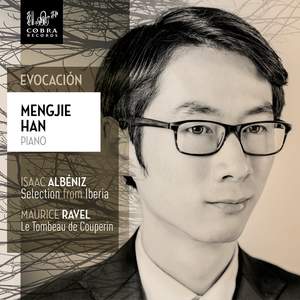 A CD is a composition too. Not only does it contain compositions, but together they form a new entity. At least, that is the case with this new recording by the Dutch pianist Mengjie Han. He deliberately links Isaac Albéniz and Maurice Ravel. Strange bedfellows, those two? One of them epitomising all things Spanish, the other a Frenchman through and through. And rising between them, literally and metaphorically, the imposing peaks of the Pyrenees.

However, nothing is as it initially appears to be. Although of course Albéniz’s Iberia and Ravel’s Le Tombeau de Couperin can only be played consecutively, Mengjie Han would have preferred them to be heard ‘simultaneously’, so as to demonstrate how interwoven their idioms are. After all, Ravel is a lot more Spanish than you might expect, and Albéniz a lot more French. Ravel incorporates Spanish rhythms, often with that typically Spanish ambiance that you could – somewhat paradoxically – describe as rough and sultry; Albéniz on the other hand scaled the greatest heights only after discovering French impres- sionism. They cross the Pyrenees in opposite directions, as it were, breathe in the foreign in uences and use them to enrich their work.

On the 8th of November 2014 the Dutch pianist Mengjie Han won the Third Prize at the 10th International Franz Liszt Piano Competition in Utrecht, The Netherlands. As the rst Dutch Prize winner of the Liszt Competition since nine years, he embarked on an extensive concert tour both in the Netherlands and abroad, taking him to countries such as the USA, Turkey, Saudi-Arabia and Lithuania. He won First Prizes at the Steinway Piano Competition, the Young Pianist Foundation Com- petition and the Princess Christina Competition, which led to perfor- mances in North-America, Africa and Asia.

Next to his accomplishments as a soloist Mengjie Han is a passionate chamber musician with the Amatis Piano Trio. The trio has won several international competitions and has been named “New Generation Ar- tists 2016-18” by the BBC as well as “Rising Stars” by the ECHO, which will lead to a concert tour of the most important European concert halls in season 2018/19.