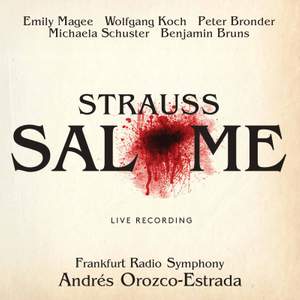 What we gain here in exemplary clarity of Strauss’s sonic spider-web we lose in momentum for, say, the climactic welter which ends in Jokanaan’s curse…Magee as the spoiled princess propels the... — BBC Music Magazine, January 2018, 4 out of 5 stars More…

Desire. Brutality. Lust. Slyness. Anxiety. What a fascinatingly menacing thematic melange is seething in this Salome. Richard Strauss, the "nervous contrapuntalist," had immediately recognized the potential of Oscar Wilde's play, and had proceeded to add to it a musical meta-plane, which resulted in Salome becoming the scandalous new point of departure for opera in the 20th century.

In its vivid psychological depiction of a corrupt world, Salome is, at the same time, both child of and witness to the dawning of the 20th century - a reflection of a moribund late-bourgeois era, captivated by its own putrefaction. The opera hit the nerve of the times. Strauss poured the Salome catastrophe into a one-act opera lasting a mere 100 minutes. However, these are 100 highly condensed minutes, which demand the listener's full and uninterrupted attention without any break; first torturing him emotionally and then trickling the venom of sweet, seductive music into his ears and mind; laying his nerves bare, then making him tremble in aroused expectation.

This PENTATONE album featuring the young, up-and-coming conductor Andres Orozco-Estrada leading the hr Symphony Orchestra (= formerly Frankfurt Radio Symphony Orchestra) is a live recording of a concert given on September 10, 2016 in Frankfurt. The critics were enthusiastic: "The title role was wonderfully relaxed, all the essential components were in general harmonious, and Andres Orozco-Estrada emphasized the power of the orchestra."

Indeed, Orozco-Estrada surrounded his Salome with outstanding soloists of the German opera repertoire: Wolfgang Koch (Jochanaan), Peter Bronder (Herod), and Michaela Schuster (Herodias). The American soprano Emily Magee made her debut as Salome in Berlin in 2011. Since then, she has developed into a true Strauss specialist - and not only in this role. The Frankfurter Rundschau praised her "readily appealing, powerful and untiring soprano voice, which never gets drowned, not even in the orchestral tutti. Her face was a fascinating reflection of the slyness, the caprices, the bitchiness of a pampered princess."

What we gain here in exemplary clarity of Strauss’s sonic spider-web we lose in momentum for, say, the climactic welter which ends in Jokanaan’s curse…Magee as the spoiled princess propels the drama. At first she sounds too much like her mother…Yet the demands for a ’16-year-old with the voice of an Isolde’ are rarely met, and Magee has strength and passion in spades for the queasy final scene.

Orozco-Estrada’s approach is unrushed and often expansive...Magee’s Salome spits out her words as part of a characterisation of the Judean princess that’s compellingly real and convincing...an unusually persuasive aural drama and a deeply musical account of the score – a compelling listen featuring a fine cast and expertly conducted. It’s a set that can be warmly recommended.

Recorded live…this account of Strauss's score rightly centres on a remarkable performance of the title role from Emily Magee. Her ability to encompass the many facets - vocal and dramatic - of the the role, while pacing it effectively is outstanding. She is well partnered by the grandly sonorous Jokanaan of Wolfgang Koch, whose ample handsome tone preserves a biblical dignity and (importantly) youthfulness throughout in a reading that is also impressively articulate. The orchestral playing reveals virtuoso command of the score, finely captured in the solid but clear recording and with apparently no intrusive audience noise to contend with.

Magee’s outstandingly well sung Princess of Judaea is probably the most convincing on disc since Hildegard Behrens...Koch is a powerful, fearsome Prophet and Michaela Schuster, as his formidable enemy Herodias, is venomous with the text, yet always sings the notes beautifully...and the Frankfurt orchestra play Strauss’s memorably lurid score brilliantly for their chief conductor.