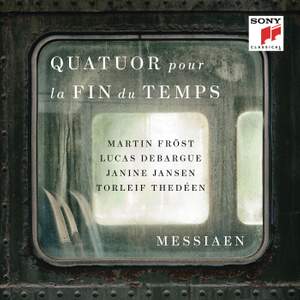 Far from an ad hoc starry ensemble, this interpretation has had time to mature, while retaining freshness in execution. The increased hush found partway through Jansen and Thedéen’s extended... — BBC Music Magazine, March 2018, 5 out of 5 stars More…

Presenting Messiaen's most original and poignant chamber work recorded by this sensational quartet: Martin Fröst, Lucas Debargue, Janine Jansen and Torleif Thedeen. One of the most original chamber works: Olivier Messiaen is one of the great composers of the 20th century and the Quartet for the End of Time is probably his greatest chamber work. The album pushes all kinds of boundaries, first of all through its genesis in a concentration camp, through the unusual combination of the instruments, and then through the performance by Martin Fröst himself who is known for pushing musical & technical boundaries: "There is something approaching the supernatural about his command of his instrument,” said The New York Times. A very personal recording: Martin Fröst and Janine Jansen first met 16 years ago and the first piece they ever played together was the Quartet for the End of Time. Torleif Thedeen was also part of that group. This piece left them with a deep sense of connection, and now they record it together for the first time. Janine Jansen, internationally recognized as one of the great violinists and known as a “crowd pleaser", regularly receives standing ovations from enthusiastic audiences. Lucas Debargue, who became famous overnight after causing a sensation at the 2015 Tchaikovsky Competition, enjoys widespread popularity. Opportunity to promote the album through a small tour with the Quartet, starting in Barcelona and culminating in NYC at Carnegie Hall. The work was composed and first performed at a Nazi concentration camp in 1941 while Messiaen was a prisoner. It is scored for clarinet, violin, cello, and piano, reflecting the players Messiaen had available to him at this time. Messiaen, a devout Catholic, based the work on the language and imagery of the apocalypse (Book of Revelation) where time is forever abolished.

Far from an ad hoc starry ensemble, this interpretation has had time to mature, while retaining freshness in execution. The increased hush found partway through Jansen and Thedéen’s extended duet in the second movement is but one magical moment among many…a performance of Messiaen’s Quartet for the end of time to live with.

The Quartet has been much recorded in the CD era but I can’t recall another version that so persuasively favours the ferocity over the serenity…The overall effect might be controversial in probing the score for every hint of disquiet and unease but no one can doubt the relevance [Fröst’s word] of the result.

The playing is flawless but still deep-felt, unflinching in the white heat of the Dance of Fury, intently hushed in the Abyss of the Birds, fervent in both tender Louanges.

Fröst was the driving force behind this recording of Messiaen’s mystical, wild-eyed quartet. He is joined by three formidable artists who all demonstrate infectious affinity for this profound music.