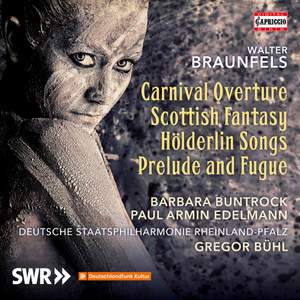 Walter Braunfels is a composer whose music died twice: Once when the Nazis declared his music “degenerate art," then again when post-war Germany had little use for the various schools of tonal music; when the arbiters of taste considered any form of romantic music – almost the whole pre-war aesthetic – to be tainted. This fifth release of Capriccio’s Braunfels Edition shows again his large range of colorful music. From his first success in 1908 (Carnival Overture), a still unknown virtuoso Viola Concerto (Scottish Fantasy) to a strictly structured Prelude and Fugue - Braunfels Music is worth being discovered in our days.