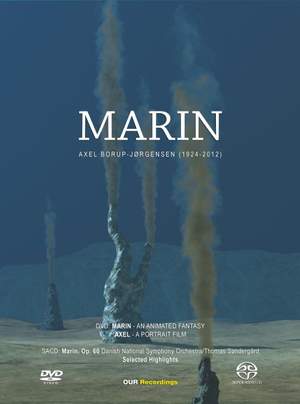 The Danish composer Axel Borup-Jorgensen (1924-2012) was one of the 20th century’s great Scandinavian “silent individualists.” Born in Denmark and raised in Sweden, he was largely self-taught as a composer, emerging on the international spotlight in 1965 when his Nordic Summer Pastoral won first prize in the competition for a short orchestral work held by Danmarks Radio. While the avant-garde of the sixties exerted a strong influence on Borup-Jorgensen's sound world, he always followed his own intuition and obeyed his extraordinary sense of organizing sound combined with a passionate, almost mystical regard for nature. Borup-Jorgensen's music exists on the margins of silence, punctuated with searing dramatic eruptions, all of which can be heard in his orchestral masterpiece Marin (1970). Borup-Jorgensen massive ‘sea symphony’ exists in its own unique world of sound - sometimes in as many as 55 separate voices - and is one of the most challenging and meticulously detailed orchestral textures ever set to paper. Such visceral music demands visual expression and as part of this very special DVD/SACD release, Lückow Film, and an international team of animators directed by Morten Bartholdy bring Borup-Jorgensen's musical world to life. Also included is the new film AXEL - a portrait of both the composer, and of mid-century Danish modernism featuring interviews with other composers, colleagues and friends, as well as excerpts from recent live performances of the music by Axel Borup-Jorgensen.