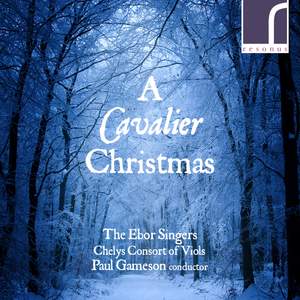 What Christmas music was sung during the English Civil War period? The York-based Ebor Singers answer that question in this fine anthology of works by Gibbons, Byrd, Dering, Jenkins and others. — BBC Music Magazine, Christmas 2017, 4 out of 5 stars More…

Gibbons, O: A Collection of the Sacred Compositions: No. 21, See, See the Word is Incarnate

Peerson: Upon My Lap My Sovereign Sits

Following on from their debut release on Resonus Music for Troubled Times (RES10194) The Ebor Singers, with director Paul Gameson, returns to the label with a companion album of music for Christmas from the time of the English Civil War. With A Cavalier Christmas, the choir are joined by the Chelys Consort of Viols in exploring this fascinating, yet turbulent, period in music as Charles I sought to continue to observe the festive season in style, contrary to attempts by Englands Puritan-influenced parliament to ban such celebrations.

What Christmas music was sung during the English Civil War period? The York-based Ebor Singers answer that question in this fine anthology of works by Gibbons, Byrd, Dering, Jenkins and others.

Not too many tidings of comfort and joy during the Civil War, it seems...The programme is brilliantly executed and beautifully sung by a mixed — male/female, amateur/professional — choir based in York.

this features English music written around the time of the Civil War, and indeed including an extraordinary viol piece by John Jenkins depicting the siege of Newark. Fine singing and playing, but a melancholy selection.

The instrumental numbers, immaculately played by the Celys Consort of Viols, include a quirky work commemorating the 1644 Siege of Newark. Best are the pieces where voices and vocals combine: Byrd’s “O God that guides the cheerful sun” is a wonderful example.

Paul Gameson coaxes fine singing and some admirable solo contributions from his Ebor ensemble, with the Chely’s Consort of Viols providing discrete accompaniment throughout.