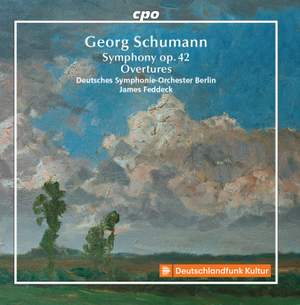 [Feddeck] is an inspirational conductor, he injects copious energy and enthusiasm into the performances, and clearly loves the music. The recorded sound is first rate, allowing all the orchestral... — MusicWeb International, December 2017 More…

This second release of music by Georg Schumann features symphonic works. Schumann, who was the director of the Sing-Akademie in Berlin for many years and a professor of composition at the Prussian Academy of the Arts, is currently being rediscovered as a late romanticist, but during his lifetime he was regarded as a neoromanticist. The Symphony in F minor is his most monumental instrumental work. What one critic wrote of the symphony of his youth also is above all true here: ‘… how one idea logically develops from the other’. The recording also includes two of Georg Schumann’s overtures. He was able to express all the moods in music – and this is his claim to greatness. After the weighty Prelude to a Drama he wrote a joyous celebration of life in the Lebensfreude overture, a work overflowing with delight in musical performance.

[Feddeck] is an inspirational conductor, he injects copious energy and enthusiasm into the performances, and clearly loves the music. The recorded sound is first rate, allowing all the orchestral detail to emerge convincingly. These are wonderful scores and I'm thrilled to have made their acquaintance, and more than happy to spread the news.

Overall, it’s a work one is pleased to hear while understanding why it’s a rarity. The two overtures are just as large- scale, both a quarter- of- an-hour, and have their moments, but…! Fine playing, sound and conducting.