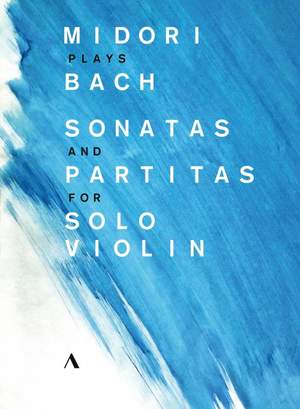 Midori plays with balletic grace and intense concentration…There is something profoundly moving about hearing Bach in the very spaces in which [Bach] would have played these works, and one cannot... — BBC Music Magazine, May 2018, 5 out of 5 stars More…

Midori’s recent interpretation of Johann Sebastian Bach’s Sonatas and Partitas for Solo Violin has earned her many accolades by audiences and the media worldwide. In August 2016, Midori performed these pieces, known as some of the most challenging for any violinist, for an audio-visual recording at the Castle of Köthen (Schloss Köthen) where Bach served as Court Chapel Master between 1717 and 1723. There, in Midori’s precise, light but nevertheless emphatic playing, a unique world of sound unfurls that maybe Bach himself would have imagined while composing these polyphonic masterpieces. Music and space merge exclusively in the acoustic offered by the location, which supports the breathtaking polyphony and the detailed richness of the works as well as the technical brilliance and perfection of Midori’s subtly shaped performance.

Midori plays with balletic grace and intense concentration…There is something profoundly moving about hearing Bach in the very spaces in which [Bach] would have played these works, and one cannot fail to be mesmerised by Midori’s flawless technique, by the orchestra of colours she coaxes from just four strings, by the elegance and rhetoric of her phrasing.

The idea is a nice one, and it’s equally nice to bae able to watch the immersed concentration on Midori’s face as she puts in her graceful, heartfelt, neatly ornamented and technically superb performances, all couched within a timeless stylistic playing approach.

Midori’s elegant appearance, captivating stylishness and gentle sense of awe in her historical surroundings offset the profoundly searching quality of her playing in a way that only a visual medium can successfully capture.