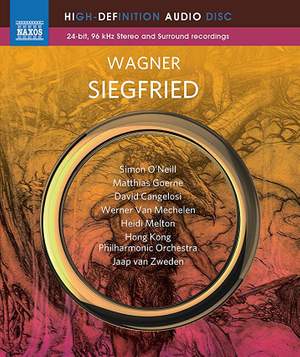 This is the third and penultimate release in the acclaimed cycle of Wagner’s Der Ring des Nibelungen with the Hong Kong Philharmonic conducted by Jaap van Zweden. Of the star cast for Siegfried, Matthias Goerne has been singled out for particular praise by the critics, with Gramophone stating that he “sings Wotan beautifully, with much baritonal sophistication, predictable (from an experienced Lieder recitalist) care for words and able negotiation of trickier moments.” Opera News wrote “Matthias Goerne is a revelation... [he] upholds the great tradition of Wagner singing.”

Each member of this carefully selected cast has an established reputation in opera performance, and most are known for significant and highly demanding Wagnerian roles. These include tenor Simon O’Neill as Siegfried, one of the finest heldentenors on the international stage, and soprano Heidi Melton as Brünnhilde, who has been called “the Wagnerian voice we have been waiting for since Flagstad and Nilsson” (La Presse).

[O'Neill] the voice has a clean, clarion call edge to it and he sounds as fresh at the end of the performance as he does at the beginning [Goerne] a performance that is reflective and refreshingly free of barking, with words gently incorporated into the vocal line rather than spat out…the rest of the cast includes an imposing Fafner from Falk Struckmann and a limpid, appealing Forest Bird from Valentina Farcas.

The qualities that made the previous instalments such recommendable bargains are mostly maintained, though the standard of the singing is less consistently high.What is utterly consistent is the excellence of the Hong Kong Philharmonic’s playing...There’s never a shortage of lustre or refinement...Van Zweden’s mastery of the huge dramatic arcs in all three acts of Siegfried never falters.

An impressive, if not exceptional, Siegfried from Jaap van Zweden and his Hong Kong forces. Zweden’s detailed reading, along with the quality of the orchestral playing and the audio elevate the project, and auger well for the Götterdämmerung to come.