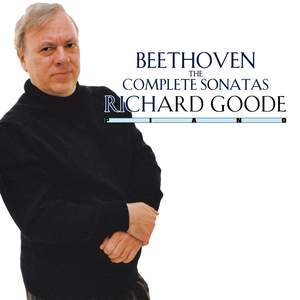 ‘An outstanding set. It is hard to think of any other artist at once technically, temperamentally and intellectually as suited to the challenges of these sonatas.’ – New York Times

‘Goode’s accounts of the piano sonatas in concert and on disc are performances to which one can return without fear of finding them stale. They lack mannerisms and any sense of a performing ego trying to insinuate itself between the music and listener – the same selfless gift that his teacher Rudolf Serkin exemplified. Superb.’ – Guardian

‘One of the finest interpretations ever put on record.’ – Gramophone

This is a reissue of Richard Goode's Grammy-nominated, 10-disc set of the complete Beethoven sonatas – the first by an American-born musician – which was originally released in 1993 to widespread critical acclaim.

Richard Goode has been hailed for music-making of tremendous emotional power, depth and expressiveness, and has been acknowledged worldwide as one of today’s leading interpreters of Classical and Romantic music. In regular performances with the major orchestras, recitals in the world’s music capitals, and through his extensive and acclaimed Nonesuch recordings, he has won a large and devoted following. An exclusive Nonesuch recording artist, Goode has made more than two dozen recordings over the years, ranging from solo and chamber works to lieder and concertos. A native of New York, Goode studied with Elvira Szigeti and Claude Frank, with Nadia Reisenberg at the Mannes College of Music, and with Rudolf Serkin at the Curtis Institute.