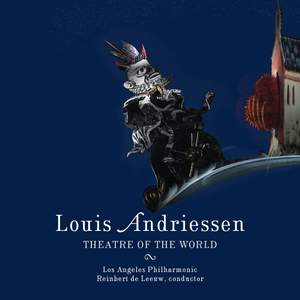 Andriessen, L: Theatre of the World

This live recording, with an exemplary cast and Los Angeles Philharmonic on brilliant form under conductor Reinbert de Leeuw, captures the gruesome, morbid melancholy of a Faustian pact – but... — BBC Music Magazine, Christmas 2017, 5 out of 5 stars More…

Andriessen, L: Theatre of the World

Nonesuch releases Louis Andriessen’s ‘grotesque stagework’ Theatre of the World — recorded live during the Los Angeles Philharmonic’s 2016 world premiere performances with conductor Reinbert de Leeuw and director Pierre Audi. The nine-scene multi-media work, which was commissioned by the Philharmonic with generous support from the Lenore S. and Bernard A. Greenberg Fund, features a libretto by Helmut Krausser. Theatre of the World is a far-ranging exploration of the German Jesuit scholar Athanasius Kircher (1601–1680). Kircher, the author of thirty books, ‘made a determined effort to summarize all of contemporary knowledge, and link it to Christian theology’, according to John Henken’s program note.

Leigh Melrose performs the role of Kircher; Lindsay Kesselman is a boy who leads Kircher and his patron, Pope Innocenzo XI (sung by Marcel Beekman), on a journey. Steven van Watermeulen is Janssonius, Kircher’s Amsterdam publisher; Mattijs van de Woerd is Carnifex, the hangman; and Cristina Zavalloni is Sor Juana. The Los Angeles Times calls her ‘ravenously ecstatic … the real vocal soul of the opera’.

Louis Andriessen, according to London’s Guardian, is ‘not only the leading Dutch composer of our time, but one of the most important figures in European music in the last half century, whose influence has spread far beyond that of his own works’. His music has explored politics, time, velocity, matter, and mortality in five works for large ensemble: De Staat (Nonesuch, 1991), De Tijd (Nonesuch, 1993), De Snelheid, De Materie (Nonesuch, 1996), and Trilogy of the Last Day. In addition to Theatre of the World, his stage works include the La Commedia (Nonesuch, 2014), Writing to Vermeer (Nonesuch, 2006), and Rosa: The Death of a Composer (Nonesuch, 2000), as well as the monodrama Anaïs Nin. Nonesuch also released an album with his De Stijl and M is for Man, Music, Mozart in 1994. Andriessen’s recent awards include the Marie-Josée Kravis Prize for New Music, the Caecilia Prize, and the Grawemeyer Award.

The Los Angeles Philharmonic Association, under the vibrant leadership of Music & Artistic Director Gustavo Dudamel, presents an inspiring array of music from all genres—orchestral, chamber, and Baroque music, organ and celebrity recitals, new music, jazz, world music and pop—at two of L.A.’s iconic venues, Walt Disney Concert Hall and the Hollywood Bowl. The LA Phil’s season at Walt Disney Concert Hall extends from September through May, and throughout the summer at the Hollywood Bowl. With the preeminent Los Angeles Philharmonic at the foundation of its offerings, the LA Phil aims to enrich and transform lives through music, with a robust mix of artistic, education, and community programs.

This live recording, with an exemplary cast and Los Angeles Philharmonic on brilliant form under conductor Reinbert de Leeuw, captures the gruesome, morbid melancholy of a Faustian pact – but with key glimmers of beauty…A penetrating scrutiny of art and reason.

Immediate, transparent and almost disarmingly direct, Andriessen’s score is the ideal counterweight to this dense and complex plot…And by placing flesh-and-blood individuals t the centre of the dramatic action rather than character ‘types’, Andriessen imbues Theatre of the World with an expressive power and intensity rarely found in dramatic works of this kind.

Both severally and collectively, the performances are magnificent. To the role of Athanasius Kircher, Leigh Melrose brings a wide emotional range, powerfully and virtuosically conveyed. Lindsay Kesselman, vocally bright and pure, is thrilling as the Boy. The luminous, committed playing of the LA Philharmonic brilliantly reveal the score's astonishing textures, and the orchestra is marvellously directed by Reinbert de Leeuw.

Sung with tremendous presence by Leigh Melrose...with Reinbert de Leeuw conducting the Los Angeles Philharmonic, the wind-dominated instrumental music emerges powerfully in all its array of styles - from children’s songs and the baroque to jazz and serialism.