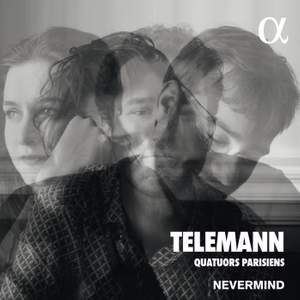 The excellent performances by NeverMind explore the rewarding subtleties of Telemann’s writing with intimacy and an unerring sense of stylistic decorum. — BBC Music Magazine, February 2018, 5 out of 5 stars

After their first recording on Alpha, ‘Conversations’, featuring rarely heard pieces by Quentin and Guillemain, Anna Besson (flute), Louis Creac’h (violin), Robin Pharo (viola da gamba) and Jean Rondeau (harpsichord) continue to introduce the public to the riches of a repertory that has been too long ignored, with this recording of Georg Philipp Telemann’s Nouveaux Quatuors parisiens.

At the height of his glory, the German composer left Hamburg in 1737 to spend time in Paris and appreciate the city’s vibrant musical life. There he composed a new set of quartets that came to be called the ‘Paris Quartets’ and in which he celebrated the union of the European styles of his time, at the zenith of the Baroque. The four musicians and friends of Nevermind pursue their exuberant conversation, as virtuosic and eloquent as ever.

The excellent performances by NeverMind explore the rewarding subtleties of Telemann’s writing with intimacy and an unerring sense of stylistic decorum.