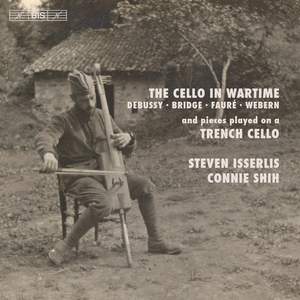 The Cello in Wartime

If IKEA were to make a cello, this would be it…Sow how does it sound? In Steven Isserlis’s hands, remarkably fine – though he only uses it for a handful of evocative miniatures…On Isserlis’s... — BBC Music Magazine, February 2018, 5 out of 5 stars More…

trad.: God Save the King (arr. for cello and piano)

As the centenaries of various events of the First World War are being commemorated, we are reminded of the great battles and the large-scale suffering. To imagine what day-to-day life may have been like in the trenches in Flanders is more difficult, however, 100 years later and with no living survivors of the war to bear witness. Poems and paintings can give us some idea but, as this disc from Steven Isserlis proves, so can music! The main, more conventional section of the programme is a selection of cello works composed around the time of the war, by composers from three of the countries involved in it: France, Britain and Austria. This is followed by something rather more unusual, however, as Isserlis exchanges his Marquis de Corberon Stradivarius for an instrument that was once played and heard in the trenches of Ypres. Harold Triggs, the owner of this so-called trench cello, brought it with him to Flanders from England other soldiers, on both sides of the conflict, constructed their own violins, cellos or flutes on site, from ammunition boxes, pipes and whatever else they could get hold of. These instruments thus become a highly moving testimony to every mans need for beauty and solace and joy, even in the middle of a battlefield. With the delicate support of Connie Shih on the piano (and in fact even pianos could be found in the trenches, even if not concert grands!), Isserlis and his trench cello transport us, for a brief moment, to a trench near Ypres during a quiet spell between skirmishes, with soldiers resting, writing home, playing cards and with the help of the music dreaming of a life elsewhere.

If IKEA were to make a cello, this would be it…Sow how does it sound? In Steven Isserlis’s hands, remarkably fine – though he only uses it for a handful of evocative miniatures…On Isserlis’s Stradivarius cello, Webern’s skeletal Drei Kleine Stücke make a clever connection between this soundworld and the great sonatas of the period: maximum expression from threadbare resources…Crowning all this is perhaps the finest recording of Faure’s First Sonata I have ever heard.

There’s a viola-like reticence to [the instrument’s] sound that gives an affecting sweetness to Isserlis and Shih’s performances of miniatures…But Isserlis is back on his Stead for the four main works…these are passionate, red-blooded performances – the Debussy, in particular, is a thing of rich oils and dark charcoal…An imaginative and superbly realised disc.

Isserlis’s way with the Fauré impress through its melodic simplicity, Connie Shih as textural delicacy and command of the most subtle shades of rubato aid the cellist in crafting performances that are no less keenly attentive to the letter of the score but, now even more sharply characterful.