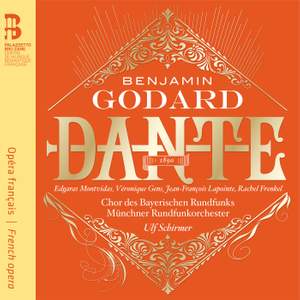 There is much that is strong and much that is beautiful…Edgaras Montvidas and Véronique Gens make a fine pair of lovers, their ardent duet in Act 2 being one of the high spots…There’s excellent... — Gramophone Magazine, January 2018 More…

Act I: Il a raison (Chorus)

Dante Alighieri, born in Florence in 1265, was at once a poet and an important political figure of his time. His celebrated Divine Comedy relates his supposed descent to Hell and slow ascent to Paradise. Godard’s operatic treatment of his life (1890) skilfully juxtaposes the political milieu – crowd scenes in Florence and the quarrel between Guelfs and Ghibellines – with the expression of the courtly love he feels for Beatrice, betrothed to his friend Bardi.

The most remarkable element of the opera is the integration of a ‘Vision’ that is nothing less than a synthesis of the Divine Comedy set to music. Its third act is built around a fantasy ‘Hell’ and ‘Paradise’, featuring an Apparition of Virgil, Chorus of the Damned, Infernal Whirlwind, Divine Radiance and Apotheosis of Beatrice. Godard is here at the peak of his melodic inspiration and compositional mastery, in a style that brings Gounod up to date and need not fear comparison with Massenet.

There is much that is strong and much that is beautiful…Edgaras Montvidas and Véronique Gens make a fine pair of lovers, their ardent duet in Act 2 being one of the high spots…There’s excellent support from Rachel Frenkel and Andrew Foster-Williams, and Ulf Schirmer directs his Bavarian forces with the zeal of a missionary.

Godard's score is certainly grand and expansive, with long melodic structures and some rousing climaxes, particularly at the end of the opera's four acts. [Véronique Gens] she seems effortlessly to breathe her role rather than sing it, the words emerging with firmness and clarity while embedded evenly in her limpid tone. Hers is a performance of astonishing beauty.