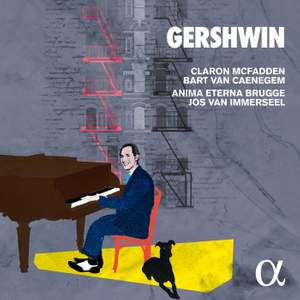 Lively performances, including the Catfish Row suite based on Porgy and Bess, capped by a ‘Summertime’ to die for by soprano Claron McFadden. — BBC Music Magazine, Christmas 2017, 4 out of 5 stars

Gershwin: The Show is on

By Strauss (From "The Show Is On")

The Man I Love

My Man Is Gone Now

I Got Rhythm (From "Girl Crazy")

George Gershwin composed his Rhapsody in Blue in 1924. In the same year, he launched his collaboration with his brother Ira, which produced countless songs. He never achieved his ambition of studying with Maurice Ravel, but was always enthralled by the symphonic poem and the concerto. His masterpieces, such as An American in Paris and the opera Porgy and Bess, greatly enriched the American musical heritage. Jos van Immerseel has always been fascinated by Gershwin, but it was the appearance of a new edition of the scores that prompted the pianist and conductor to record this extensive homage. Thanks to the very latest research undertaken by the University of Michigan, the Library of Congress and the Gershwin Estate, he and his companions in Anima Eterna have got closer than ever before to the composer’s intentions, making use of the appropriate instruments.

Lively performances, including the Catfish Row suite based on Porgy and Bess, capped by a ‘Summertime’ to die for by soprano Claron McFadden.