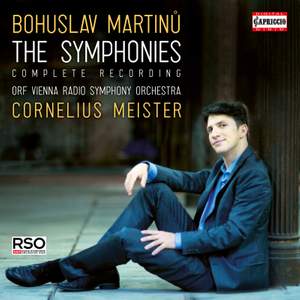 Martinu has suffered the fate of not enjoying the same popularity and wide appeal like Bedřich Smetana, Antonín Dvořák und Leoš Janáček on the podium. This often goes so far that his singular skill is referred to, but that the wealth of his oeuvre in all the salient genres is hardly familiar. For decades, Martinů had shied away from composing a symphony. The first one was finally to be written in the USA in 1942, followed by another one every year until 1946 (the sixth was only added to the work catalogue in 1953). For this reason, there is sometimes talk of the ‘American’ symphonies. The symphonies do mirror the events of the time, but at the same time long passages must be regarded as absolute music.

These are truly great symphonies: here they reveal their treasures.