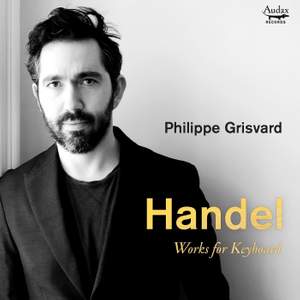 Handel: Sonatina in A minor, HWV584

Even though Handel's œuvre for solo keyboard is somewhat irregular and less extensive than that of Bach or Domenico Scarlatti, it remains nevertheless immensely fascinating and surprising. In fact, by exploring the various genres (suite, capriccio, fugue, chaconne, ...) outside of the famous Walsh collections of Suites (1720 & 1733), we discover the composer's many distinct faces. For his first solo album Philippe Grisvard looks also at composers who played essential roles in the development of Handel's style, such as Zachow, Krieger, Mattheson and Babell and thus draws a vivid and colourful picture of Handel's life.

Philippe Grisvard was born in Nancy. After harpsichord lessons with Anne-Catherine Bücher he studied at the Schola Cantorum Basel with Jesper Christensen and Edoardo Torbianelli. Philippe now lives in Paris and plays regularly with Le Poème Harmonique, the Chamber Orchestra of Europe, La Fenice, La Chapelle Rhénane, Le Cercle de L’Harmonie, Les Nouveaux Caractères, Opéra Fuoco and Emmanuelle Haïm's Le Concert d'Astrée. Philippe is one of the core members of the Ensemble Diderot and is a sought after basso continuo expert who plays with many of today's leading baroque musicians. This album marks his long awaited solo debut.