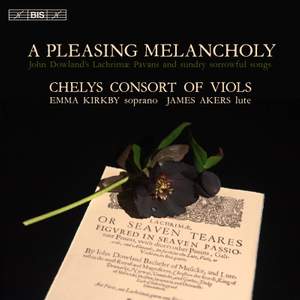 A Pleasing Melancholy: Works by Dowland & Others

Kirkby, with her half-a-century’s experience in this repertoire, lends perceptive insights both to the poetic texts and the musical settings. Words are beautifully etched with a dark, inky tone... — BBC Music Magazine, January 2018, More…

Book of Songs, Book 2: No. 2, If Floods of Tears Could Cleanse My Follies Past

Danyel: If I Could Shut the Gate Against My Thoughts

‘A pleasing melancholy’ is how Robert Burton described the feeling that certain music can give rise to, in his The Anatomy of Melancholy from 1621. Some 20 years earlier John Dowland, melancholic par excellence, had expressed a similar idea in the dedication of his Lachrimae, or Seven Tears: ‘pleasant are the tears which music weeps’.

During this period in England, melancholia had become fashionable, especially in cultural and literary circles, and spawned countless poems, paintings and songs. When Dowland’s lute song Flow My Tears was published in 1600, the instrumental Lachrimae Pavan on which it was based had been in circulation for several years and was the composer’s ‘number one hit’ both in England and on the continent – and four years after the song, he returned to the music and varied it in the ‘seven tears’ for viol consort and lute.

Colleagues of Dowland such as Robert Jones and John Danyel explored similar moods and emotions in their own songs, sometimes – as in Danyel’s Eyes look no more – making clear allusions to Dowland’s famous pavan. The Chelys Consort of Viols released their first disc in 2015 to critical acclaim. For the present recording they are joined by lutenist James Akers, and Emma Kirkby, the English soprano who has long been a leading figure in the field of early music.

Kirkby, with her half-a-century’s experience in this repertoire, lends perceptive insights both to the poetic texts and the musical settings. Words are beautifully etched with a dark, inky tone that paints the music’s various shades of blue. The vocal attack may not be as precise as it once was…yet her voice retains its distinctively crystalline quality.

Their soft blend, coupled with the weight and depth of sound, is a luxury instrument, capable of embracing the emotional extremes of Dowland’s music without strain. But in gaining this amplitude they lose that grit and husk in the sound that gives a viol consort its personality…If you’re looking for the most beautiful recording of the Lachrimae, this is unquestionably it. Whether it’s the best is very much a matter of taste.

Emma Kirkby continues to amaze as much as – or more than – at any other time in her long and distinguished career. Has her art ever been more daring, emotionally and expressively, than it is now? And this without ever threatening the boundaries of good taste … her wealth of experience guarantees a total understanding of how to bring alive simply what’s there in the notes, in this extraordinary music.