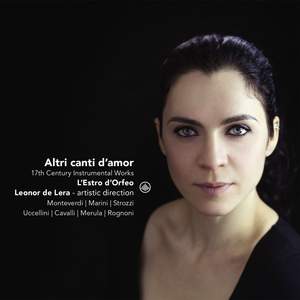 This is lovely music from a popular part of the baroque repertoire, and it receives sympathetically intimate playing from a group who achieve involving results by keeping their vocal and amorous... — Gramophone Magazine, December 2017 More…

This debut CD of L'Estro d'Orfeo ensemble takes its title Altri Canti d'Amor from a madrigal found in Claudio Monteverdi's Eighth Book of Madrigals. The program focuses on the music of the Italian Seicento and more precisely on the schools of northern Italy; mainly the Venetian school. It combines both instrumental and vocal pieces - the latter in instrumental versions - connected to the subject of 'love'.

"Using instruments instead of the voice may initially seem perverse for such a title, but to me, it suggests the idea of "other ways of singing about love". We thus reaffirm the great value and importance that instruments started gaining in the first half of the 17th century, where they ceased serving merely as accompaniments to the voice and gradually became the main protagonist of the musical scene, attaining a level of virtuosity that had never been explored before." - Leonor de Lera

This is lovely music from a popular part of the baroque repertoire, and it receives sympathetically intimate playing from a group who achieve involving results by keeping their vocal and amorous inspirations in mind throughout…Certainly (and in a good way) I was left wanting more.

Director Leonor de Lera’s nimble violin and Josué Meléndez’s silky-smooth cornetto – both instruments vaunted as the closest, expression-wise, to the human voice – soon make one forget the absence of a singer, and they are ably supported by violin, viola da gamba, chordophones and harpsichord in works by Marini, Merula, Uccellini, Rognoni, and Barbara Strozzi.