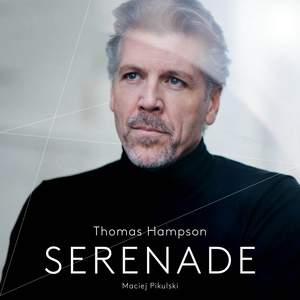 Mélodie has a particular association with the baritone voice, and Hampson’s charm, insight and care rightfully take their place in that tradition. Bearing the title ‘Serenade’, this collection... — BBC Music Magazine, February 2018, 4 out of 5 stars More…

Curated with the French Literature scholar Sylvain Fort and in a first collaboration with the Polish pianist Maciej Pikulski, the track listing includes romantic and introspective as well as humorous selections by Bizet, Chabrier, Chausson, Gounod, Magnard, Massenet, and Saint-Satins, featuring texts written by some of France's most revered writers including Victor Hugo, Paul Verlaine, Rosemonde Gerard, and others.

Mélodie has a particular association with the baritone voice, and Hampson’s charm, insight and care rightfully take their place in that tradition. Bearing the title ‘Serenade’, this collection is full of stimulating connections, progressions and juxtapositions, all captured in Pentatone’s typically warm, natural sound.

There are many byways through the well-stocked garden of French song for those who want to explore further afield. Thomas Hampson has put together an imaginative programme that places just a handful of well-known songs along its path, including Chabrier’s jolly parade of ducklings in “Villanelle des petits canards” and Chausson’s hothouse “Le temps des lilas”.

It is, as one might expect, a disc of great intelligence…His tone now occasionally lacks lustre, and a pulse sometimes intrudes. Against that, however, must be set his ability to fuse the text, lines and dynamics into highly individual expressive statements…[Pikulski is] an excellent accompanist, subtle in his phrasing, keenly alert to shifts in mood and colour throughout.