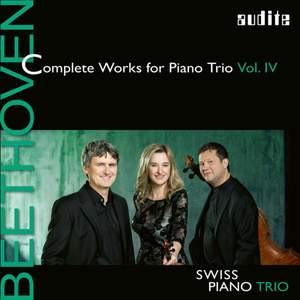 This collection of Beethoven’s works for violin, cello and piano...is played by the Swiss Piano Trio with real freshness and verve.The early Op 11 in B flat major (1797) and the one-movement... — The Observer, 10th September 2017, 4 out of 5 stars More…

Fourth instalment of the Swiss Piano Trio's recording of the complete piano trios.

Includes two major works, not counted among his seven numbered trios, whose violin parts can also be played by the clarinet.

The finale of the "Gassenhauer" Trio, which was composed in 1797, draws on a popular Singspiel melody by the composer Josef Weigl whose cheerful naiveté is very well-suited to the character of the (B-flat) clarinet.

The dimensions and ambitious scope of the work make it a truly "classical" piano trio. Sometimes referred to as the "eighth" trio, the Piano Trio in E flat major. Op. 38 for violin or clarinet, cello and piano which Beethoven published in 1807 under the title "Grand Trio." is an arrangement of the Septet. Op. 20 written in 1799-1800.

Beethoven presented the Septet in April 1800 along with the First Symphony at an Academy in Vienna where it met with enthusiastic acclaim.

Finally, the Trio Movement in E-flat major dates back to the composer's younger years: he wrote the piece in 1790 for the members of the so-called Zehrgarten Club, before later setting out for Vienna in 1792.

This collection of Beethoven’s works for violin, cello and piano...is played by the Swiss Piano Trio with real freshness and verve.The early Op 11 in B flat major (1797) and the one-movement Allegretto in E flat, Hess 48, full of classical grace, are played with light textures and plenty of invention.