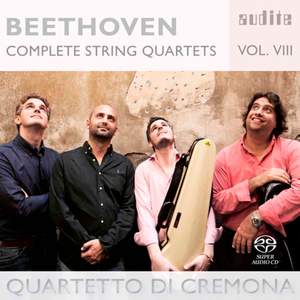 A long and fascinating journey comes to an end. These interpretations are powerful, vibrating, excitingly intense and inspiring from the very first to the very last note, providing decisive proof... — International Classical Music Awards, 2018 More…

The Quartetto di Cremona has spent over three years working on its gigantic recording series comprising all twenty string quartets as well as the two string quintets by Ludwig van Beethoven.

The success was so immediate that following the first volumes concert halls across Europe and the US invited the ensemble to perform.

Vol. VIII, the final volume of the edition opens with the third of the Op. 18 Quartets with which Beethoven introduced himself as a composer in 1800- six quartets which indeed all tell their own "story". From the tentative beginning, cautiously drawing the listener in, through to the

tempestuous concluding tarantella every bar of the Quartet in D major is replete and carefully considered. Beethoven's debut quartet is contrasted with the so-called "Harp" Quartet, which does not feature a harp but instead presents Beethoven on his way to modernism. Op. 74. A cunningly conceived first movement with prominent plucked "harp notes" is answered by the finale, where Beethoven reuses a (discarded) number from his incidental music to Goethe's freedom drama Egmont as a theme and variations - a clear indication of the fact that the composer in 1809 at the time of the Napoleonic Wars, lived through politically precarious times.

A long and fascinating journey comes to an end. These interpretations are powerful, vibrating, excitingly intense and inspiring from the very first to the very last note, providing decisive proof of Quartetto di Cremona’s overwhelming technical capacity and fantastic musicianship.