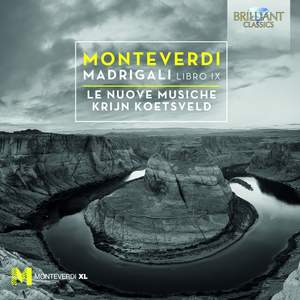 A new instalment of the Monteverdi XL project, the recording of the complete Madrigals by Le Nuove Musiche conducted by Krijn Koetsveld.

The preface suggests that Monteverdi himself compiled the 9th Book of Madrigals. He called it “Madrigali e canzonette a due e tre voci”. It is a mixture of the olden time madrigals with their equality of voices and the Canzonettas, with their predominance of one solo voice (like an opera aria), and which were all the rage by then.

The vocal ensemble Le Nuove Musiche consists of the elite of Dutch Early Music vocalists, led by eminent conductor and scholar Krijn Koetsveld. Their first Monteverdi recording, the Books 5 & 6 (BC93799) received excellent reviews in the international press, among which a “5 star” in the French Diapason and a “10” in Dutch classical magazine Luister.

The complete songs texts and their English translation are included in the booklet.